Since moving from Boston in 2011, I’ve often mentioned to friends how spoiled I was living there for 20 years: public transportation, loads of good restaurants and bars, more museums than you can count, great music venues…the list goes on and on. My move to Miami was an adjustment in many ways, but not in others. Other than the weather and the pretty significant cultural shift, it wasn’t that different than Boston. The one thing other than public transportation it was lacking was a Trader Joe’s. While I’ve never been a weekly Trader Joe’s shopper, it had a few things I liked that you couldn’t get anywhere else.

After two moves over the last 5 years to places that didn’t have a Trader Joe’s, I learned that Tulsa, my new home, was finally getting one. I wasn’t one of the people that got hugely excited by their coming, but I was happy I could occasional get the random things I missed.

My girlfriend Kelly and I went a couple of weeks after they opened to see what they had, and it was an entirely new experience for her. Wandering around the new place in Brookside I saw most of the things I’d come to expect at a Trader Joe’s. I grabbed a couple products I liked and we were enjoying wandering around the store. I’d never been much for their meat products, but as we went over and perused the displays, I spotted the uncured Black Forest bacon, and decided to grab it.

We gave it a try the following morning and were amazed at the taste! As I’ve been making bacon from scratch for a couple of years, I figured I’d do a bit of research and see if I could find any recipes. While there are tons of recipes for all sorts of bacon, I only found one for Black Forest bacon…the other hits were from folks posting on forums looking for recipes. The post I found is a great long one about the whole process for making Black Forest bacon. After reading a bit more about what gives Black Forest ham its yummy flavor, I decided to see if I could come up with something using more traditional ingredients.

I get my pork belly at one of two places in Tulsa: Perry’s Market, a great place to get good meat cheap, or one of our local Asian markets, Nam Hai. Call your local markets, both butcher shops and Asian markets, to see whether they have pork belly in stock and who has the best price. I try to get a 5-6 pound piece, and usually go for the heavier cut if it still has the skin intact. I want the pre-curing weight, minus the trimmed skin, to be close to five pounds.

Removing the skin is kind of a pain, but if you have a sharp filet knife it’s not so bad. There seems to be a bit of disagreement online about whether or you should skin the pork belly before or after smoking, with the general consensus being it’s easier after. I’ve found that after destroying a few pork bellies during the skinning process, it’s actually easier if you chill the meat in the freezer (or don’t let it fully defrost if it’s already frozen when you buy it). I start in a corner, working my knife along the edge until I can grab the skin more easily. Don’t worry if you miss a bit here or there; you can always go back and trim it.

Trim the skin off the fat side, removing as much fat as you can.

Pulling the skin back helps you get a good clean trim with your filet knife.

After you’ve skinned your pork belly, rinse it under cold water and pat it really dry with a clean kitchen towel. Place it back on your cutting board.

The Trader Joe’s bacon is uncured, but I always cure mine. When I first started making bacon, I read a lot about curing versus not curing. There are a few good articles out there; if you’re interested, a quick Google search will find them.

What I discovered was that both methods contain nitrates, as salt and celery (which are often substituted for curing salt) both include nitrates. As I’m not a food scientist, the articles I read convinced me that fooling around at home was a bad idea. I bought a jar of Prague Powder #1 on Amazon for about $17. Using between 1-2 teaspoons a batch, this is gonna last me quite a while. The pink salt you find in the spice aisle at your supermarket is not curing salt! There are a couple different curing salts out there with different curing times. Prague Powder #1 has a curing time of around seven days, perfect for homemade bacon.

I usually take a moment after I’ve skinned my pork belly to mix up the ingredients for the dry rub, which gives the meat a little more time to defrost if you bought it frozen and partially defrosted it to skin it. After reading the one and only recipe I found for Black Forest bacon (and a few others on how Black Forest ham is made), I decided to tweak the recipe and go a more traditional route.

I added juniper berries, coriander seeds, bay leaves, and garlic. I nixed the mace and maple sugar. I instead went with brown sugar, as it tends to be my go-to sweetener for bacon. I usually don’t have maple sugar around, and though I recently bought a liter of real small-batch Vermont maple syrup when I went home to New England, I decided that I’d see how it went sans maple.

I get my whole spices from Dandelion Botanical Company , which I discovered during my fiddling with drink bitters, but that’s a different story. They’ve got a huge list of whole herbs and spices. You can also find most of this stuff at either your local Asian market, Indian market or supermarket. I use an old coffee burr grinder to grind whole spices; mine uses a mason jar for collection, which makes mixing easy.

After you’ve got everything ground, you can store the mixture in an dark airtight jar in a cool dry place. It’ll keep for a bit.

Measure out your dry rub and curing salt, adding about 1/4 cup more sea salt to the mix. This recipe is a dry rub, as opposed to other recipes I make which have wet ingredients. I rub half into each the fat side and non fat side, using the extra bit that ends up on the cutting board on the edges. 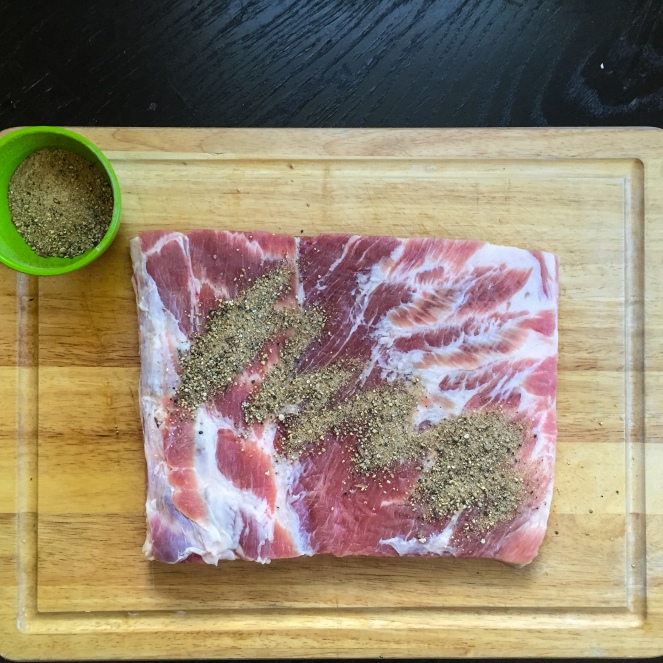 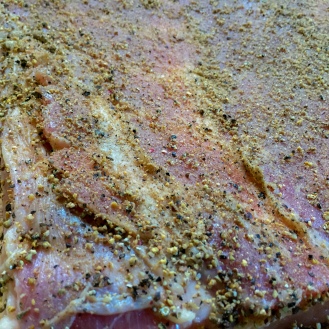 I buy a box of jumbo zipper bags for a lot of my smoking projects, as they’re a great size for 5-8 lbs of meat. Put your rubbed belly into a ziplock, making sure to scrape any leftover rub into the bag. Seal the bag up and put it on a rimmed baking sheet. After one batch of bacon I made leaked all over my fridge halfway through the week of curing, I either double bag it or just put it on a baking sheet.

It takes about seven days for the bacon to cure. The formula I’ve found is two days per 1/2″ of meat + 2 days. It’s not horrible to let it cure for a couple extra days. I start mine on Saturday, and smoke the following Saturday, as I tend to have more time to deal with the smoker on the weekend. Flip your bacon every day or so. You’ll start to notice liquid accumulating in the bag — don’t worry! It’s the curing salt leaching the water from the meat, a natural part of the curing process.

So after the week of curing, it’s finally time to smoke the bacon!

You’ll want to soak a cup or two of wood chips in some water. I use apple, maple, or hickory. Get your smoker up to a decent temp to get your chips smoking. This is about a two-hour smoke, so I usually get my smoker up to a higher temp, put the chips in until they start smoking, and then turn it down. My smoker will lose between 25-50ºF depending on how long I have the door open. Once you get the meat in, you’ll want it sitting around 175ºF.

Take your wrapped cured belly out of the fridge. Drain off the fluid that’s accumulated and give it a really good rinse under cold water. You want to make sure you get as much of the dry rub off as you can. Once you’ve got it fairly well cleaned, pat it dry really well.

Once you’ve got your smoker going with a good bit of smoke, go ahead and place your cured pork belly into the smoker. Let it smoke until the internal temp reaches about 150ºF. You’ll want to have the meat on a rack near the middle of your smoker, with the fat side facing down. Depending on how thick your pork belly is and how much meat you’ve got, it should take about two hours. 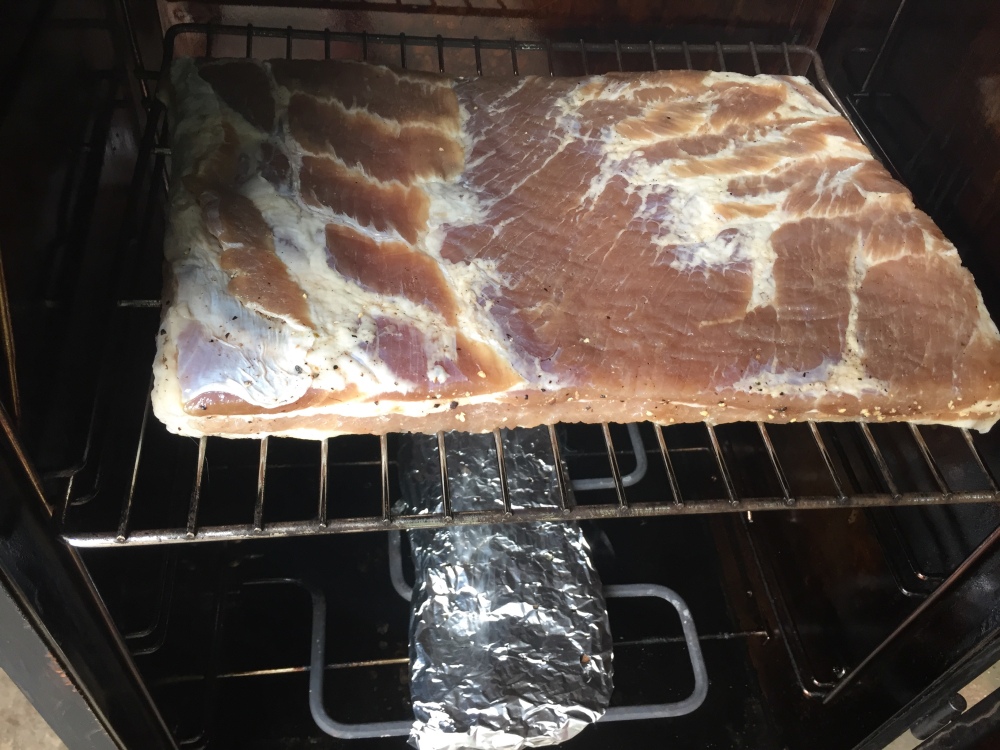 Once it’s cooked to the desired temp, shut your smoker down and let the meat rest on a rack over a rimmed baking sheet someplace out of the way (a cool oven is the perfect place).

After it’s cooled, slice it to your preferred thickness. I toss the whole slab of bacon into the freezer for 20-30 minutes, as I’ve found it’s much easier to slice when slightly frozen. Once you’ve got it sliced you’re good to go!

The meat will keep for only about a week in the fridge. I package my bacon into freezer bags (between 1/2 and 1 pound per bag) and freeze it. It will keep in the freezer for at least a month or two.

Note: This recipe can also be made in a regular oven, without the smoking chips.  Add a few dashes of Liquid Smoke and rub it into the meat before putting it in the oven for a smoky flavor. Follow the directions for using a smoker.

Makes about a cup which will last you quite a while

Curing (About a week before you want fresh(!) bacon)

Note: We always end up with a bit that’s too hard to slice. Don’t fret over it…you can use it in a ton of things: bacon-onion jam, grind it into meatloaf, or chop it into a frittata or quiche! This recipe can also be made in an oven…obviously, don’t use wood chips. It will lack the flavor that comes from the smoker, but I suppose you could always try adding some liquid smoke!